It’s the Kid versus Alyssa for all the marbles! 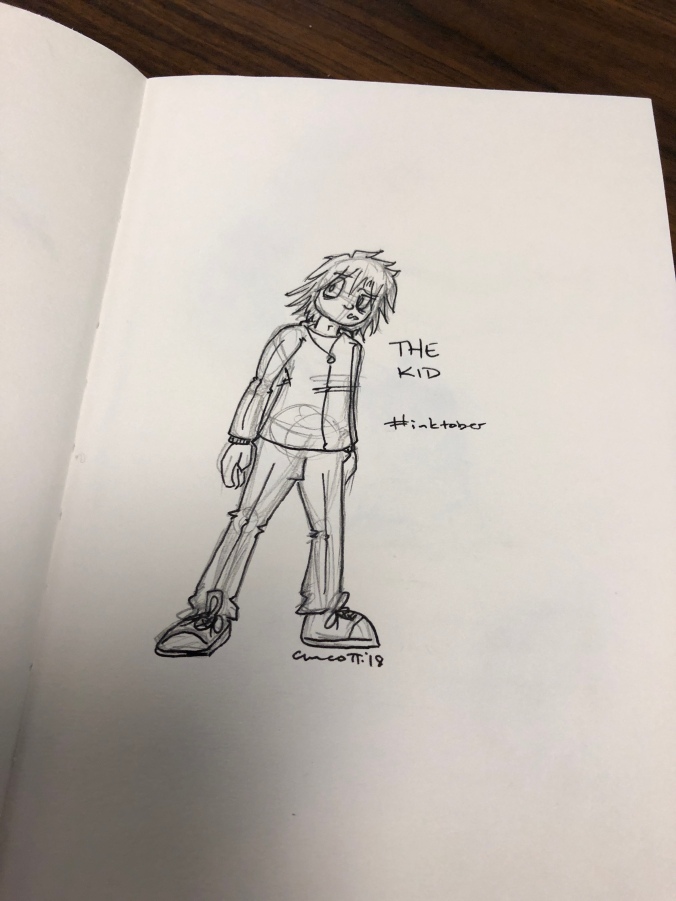 Another doodle of the Kid.

Carlos felt pretty confident in his beach volleyball skills, until the Devil rose up to block his spike.

Breaking things down is not always easy, nor is it always advisable. Dismantling an atomic accelerator was rash, but that didn’t stop the alien from taking it apart with his mind to find out how it worked. 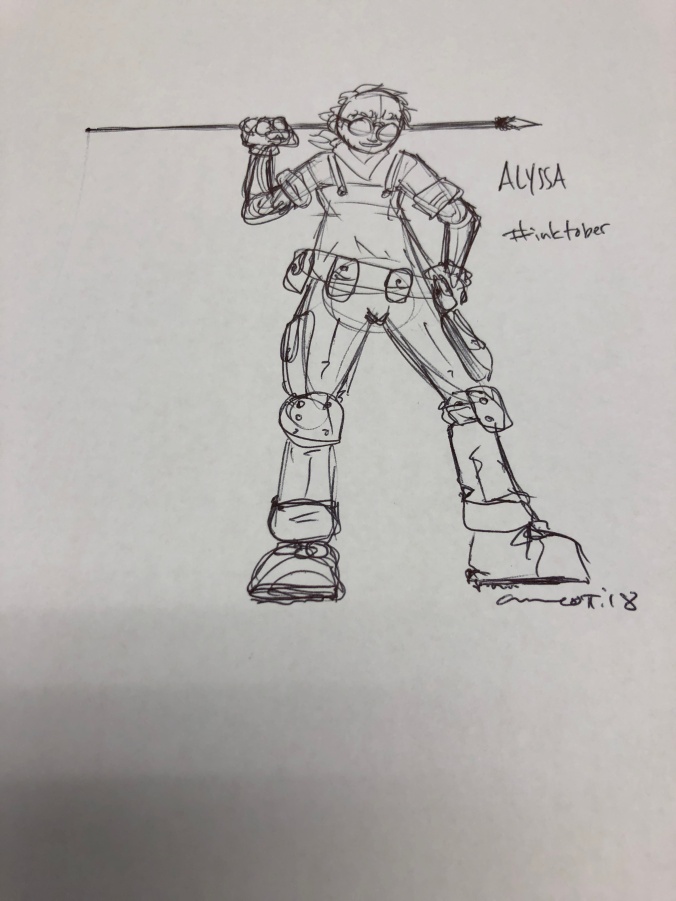 Another character from the secret project. She’s a flint napper and a devil with her spear. 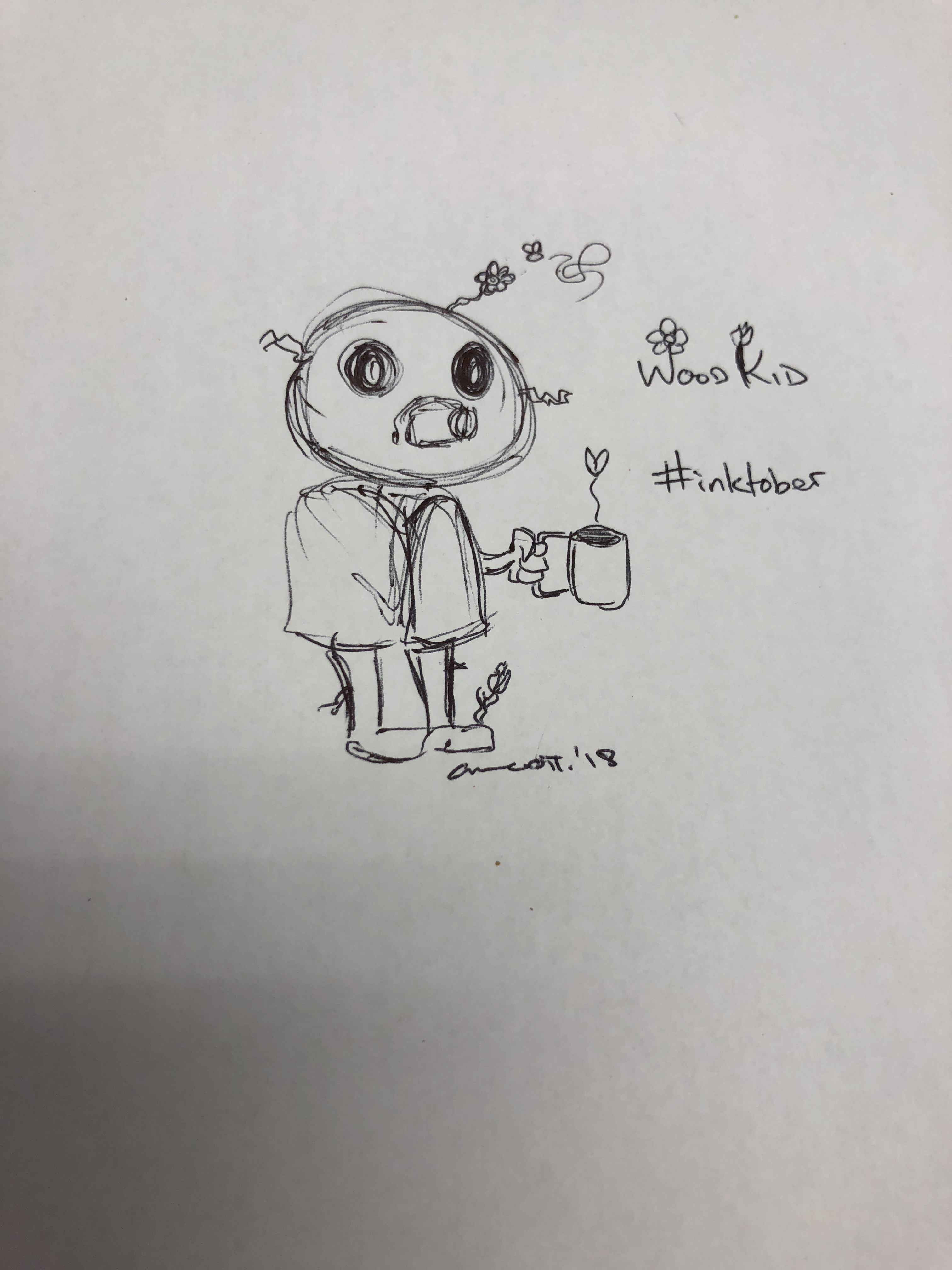 Wood Kid isn’t great with mornings. He needs a big cuppa to get going.

I have a new book out!

Well, not really. There is a new book out with my work in it, but you’ll have to read Danish to make heads or tails of it.

See, a few months back, I took on a series of commissions drawing comics about children in Denmark living with dyslexia. It took me a few months to complete all 20 comics, but it was a fun and unique experience. I’m glad I got to participate in it, though I wish there was an English version of the book available.

Well, after having the cover to my book as my phone background since November, I finally changed it earlier this week.  I tend to change phone backgrounds pretty frequently, so my dedication to the book cover background was unusual.

I switched to the image above, a sketch by the artist Nick Derington.  A quick perusal through his website – especially the sketchbook section – was pretty inspiring and impressive.  I love the guy’s art style.  Reminds me quite a bit of Chris Samnee or Darwyn Cooke.

And his stuff makes me extremely jealous.

I mean, that Batman image is a rough sketch he did with a ballpoint pen.  My finished art has never looked that good.  Never will.  Part of me is so envious of his talent.

It’s the same way with lots of authors, too.  I read their work and I’m jealous of their talent, their skill, their ability to craft a story or a character or even just a line of dialogue.  “I’ll never write anything that good,” I say to myself, discouraged and deflated.

Here’s the thing, though: everyone who does anything creative or artistic feels that way at some point.  When someone as talented and well-regarded as Neil Gaiman can still experience impostor syndrome, you know it’s a worry that weighs heavily on all of us.

So I constantly have to remind myself that someone else’s skill does not detract or reduce what I do.  I think back to a thing I heard, years ago, about music: every song is someone’s favorite.  By correlation, every book or comic must be someone’s favorite, too.  So, while there’s folks out there who absolutely love that image of Batman up there (like I do), there’s probably someone out there who prefers something I’ve drawn.  For every fan of Neil Gaiman’s American Gods, there’s someone out there who loves some other book more (maybe even my book, though I’m not so full of myself to think that’s actually true).  Hell, there’s probably even someone out there who likes the “song” (and I use that term loosely) “Revolution #9.”

Am I still jealous of Nick Derington’s skills?  God, yes.  Am I going to let that stop me from creating my own stuff?  Hell, no.

I love to draw (as anyone who follows the webcomic knows full-well), and I decided it’d be fun to do the #inktober thing for October: a drawing a day, in ink.  Some of them were pencil drawings that I then inked with a variety of pens (some were brush pens, some were Prismacolor markers, and several were done with an ultra-fine Sharpie and a regular Sharpie for a bold outline).  Others were done, start to finish, with regular ol’ ballpoint pen.  Here’s all 31 inky drawings for your enjoyment!