Bob Dylan went Born-Again Christian in 1979, and decided that his music would follow suit.  For three albums, he pursued his new Lord and Savior through his songs.  Then, rather abruptly, Dylan went back to…well, to being Dylan with the 1983 album Infidels, and the whole business of those three albums was just kinda dropped.  The accepted wisdom – and my feelings on the matter when I first heard these three albums back in graduate school – is that Dylan’s Born Again phase yielded pretty bad music.  For albums built around the theme of a newfound faith, they feel oddly dispassionate, uninspired, and bland.  And Dylan’s lyrics?  Mundane, straightforward in a way Dylan never was, and boring.  These three albums – Slow Train Coming, Saved, and Shot of Love – rank as some of the worst in Dylan’s long and varied career.

But how much of that poor reputation is deserved?  Are the albums as bad as we’re told they are?  Again, I didn’t care for them when I first heard them almost a decade ago, but I did go in with the pre-formed opinion that they were going to suck.  Maybe I – we – have been too harsh.  I mean, on paper, these albums should be great: Dylan is writing about his faith, which should lead to inspired lyrics.  And heck, Slow Train Coming has guitar work by Mark Knopfler (of the Dire Straits).  This should be a knock-out home run combo, right?

Let’s take it album by album, see how they stand up thirty-six years later. 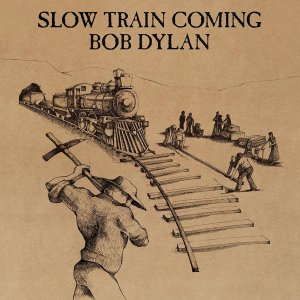 Slow Train Coming (1979): The first of the trio, and widely considered the strongest.  The album opens well with “Gotta Serve Somebody,” a song that’s solid-enough to be a legitimate part of the Dylan canon even now.  That’s followed by “Precious Angel,” a song with pretty great instrumentation and some of the blandest lyrics imaginable.  Dylan sounds bored while singing, like he can’t be bothered to try.  There’s no conviction to it.  “I Believe in You” Has the same problem (in addition to some pretty strangled, strained vocal efforts by Bob) and an uninspired instrumental piece.  Things are not looking good for the album.  Things pick back up, though, with “Slow Train,” where Dylan’s lyrics are more circumspect and he sings them with more conviction.  Knopfler’s guitar work doesn’t hurt, either.  It kinda sags in the back half, though “Man Gave Names to All the Animals” is fun and relaxed.  The album ends with “When He Returns,” a slow piano-led paean to Jesus that just drags out for a every second of almost four-and-a-half-minute run time.  On the whole, not a classic album, but pretty solid.  Three of the nine songs are pretty great, which isn’t the best ratio but it’s better than nothing. 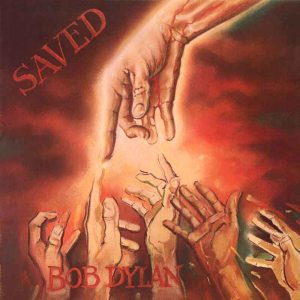 Saved (1980): Saved opens with a mostly-acapella rendition of the old spiritual “Satisfied Mind,” which is pretty awesome.  It’s followed by the title track, which plays out like a tent revival gospel sing-along.  “Covenant Woman” isn’t bad; a middling Dylan song that veers a little deeper into schmaltz than you’d like, but is still likable enough.  “What Can I Do For You?” feels like Dylan doing a Dylan impression, right down to the harmonica solos.  “Solid Rock” picks up the pace a bit, which is appreciated, and almost feels like a Tom Petty song.  “Pressing On” is genuinely great, a solid mixture of Dylan’s lyrical concerns and instrumentation that feels inspired, passionate, and heartfelt in a way the previous couple of songs just don’t.  It’s followed by “In the Garden,” which feels like something you might’ve heard on the 700 Club back in the day (that’s not a good thing).  “Saving Grace” has a similar tone and church organ intro.  The album ends with “Are You Ready,” which aims for slow-burn Chicago blues but just feels forced.  Overall, Saved is definitely weaker than Slow Train Coming.  The good songs aren’t as good as the best of Slow Train Coming, and it just feels pedestrian in too many places. 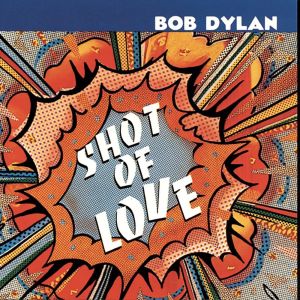 Shot of Love (1981): The third and final album of the Born Again Trilogy starts out strong with the title track, though it does get a bit preachy here and there.  “Heart of Mine” is a good follow-up, maintaining a solid rhythm and pretty good lyric read from Dylan.  “Property of Jesus” falls flat, feeling too much like a cookie-cutter praise song from a middling praise and worship band.  “Lenny Bruce” is just straight-up boring, and “Watered-Down Love,” despite an awesome title and concept, feels watered down and flat itself.  “The Groom’s Still Waiting at the Altar” comes out of nowhere, though, feeling like a song from a different time and a different Dylan.  It’s a shock to the system, a swift kick in the ass that electrifies.  It’s followed by the reggae-inflected “Dead Man, Dead Man,” which finds Dylan hollering and shouting like the best tent revivalist.  The album stumbles a bit with “In the Summertime” and “Trouble,” but ends strong with “Every Grain of Sand,” a song that (while kind of boring musically) draws on Christian themes in the way Dylan should’ve been doing since Slow Train Coming, honestly.  It’s heartfelt and clever and inspired, and a great way to close out the trilogy.

But how does the whole business feel, all-told?  If we look at it from a purely numbers game, we’ve got 28 songs, about 11 of which are actually pretty good.  Less than 50% there.  But quality isn’t an all-or-nothing sort of thing, and that maybe doesn’t tell the whole story.  Songs like “Dead Man, Dead Man,” “The Groom’s Still Waiting at the Altar,” and “Pressing On” are affecting, heartfelt, and just about as good as anything else Dylan put out in the 1970s of 1980s.  Shot of Love definitely comes out as my favorite of the three, and an album that I genuinely enjoy and will even put on sometimes just to listen to.  Honestly, that’s all I ever want out of music: the desire to occasionally just listen to it just because.  Yeah, I end up hitting the skip button quite a bit, but the songs I like, I really like.  I think that’s really true of all three albums: while I don’t care for most of the songs, the ones that are good remind you that Dylan could take just about anything and make an interesting song out of it.

Conveniently, in this day and age of iTunes and Spotify, you can easily just grab the individual tracks you like and consign the rest to the dustbin of history if you’d like.  I’d definitely recommend it for songs like all three of the title tracks and songs like “Dead Man, Dead Man,” “Man Gave Names to All the Animals,” and “Pressing On.”  They’re nice reminders that even Dylan at one of the nadirs of his career could still write better songs than lots of other musicians out there at their peak.